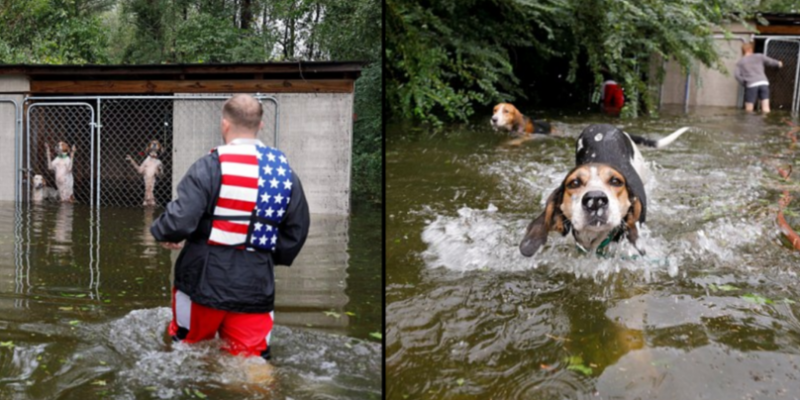 Heroic volunteers have saved the lives of six dogs that were abandoned and nearly drowned in Hurricane Florence’s fast-rising floods.

The heart-warming footage shows the poor pooches standing on their hind legs, in a locked cage, desperate for help.

The devastated animals were rescued from a property in Leland, North Carolina where their owners left them as they fled the hurricane.

It’s clear the owners hadn’t given a second thought of how the animals would fare in the violent storm.

Journalist Marcus DiPaola reported on Twitter saying: “‘Rescued six dogs in Leland, NC, after the owner LEFT THEM locked in an outdoor cage that filled with flood water that was rapidly rising.

“We got them out, but by the time we left, the water was so high that they would have drowned. BRING YOUR PETS WITH YOU! #HurricaneFlorence.”

In the emotional video, which has already racked up more than 1.3 million views, the dogs can be seen and heard whimpering as they see volunteer rescuer Ryan Nichols of Longview, Texas wade in the knee-deep water towards the creatures.

Once the chain-link fence is unlocked the dogs swim out whimpering, howling and scared. They then make it to safety in a nearby wooded area followed by the rescue volunteers.

In North Carolina the flood waters reached four feet in height on Sunday, while continuing to rise steadily. According to accuweather.com, the flooding near the Yadkin river in Jonesville is forecast to crest at 26.6 feet.

Tragically, the hurricane has left fatalities as 12 people have died in North Carolina.

This is not the only animal rescue to happen during the devastation of Hurricane Florence. On Sunday a reporter stopped mid-broadcast to help rescue a dog.

WTVD’s Julie Wilson was streaming a report on Facebook Live in New Bern while speaking to those affected by the flooding and working alongside boat crews as they attempted to rescue local residents.

It’s during this shoot that Julie noticed a woman named Tasha trying to save a Rottweiler from the knee-deep water.

“Do you think that is safe?” asked the reporter.

“It’s my daughter’s therapy dog. I have no choice,” replied Tasha.

ABC News reported that as the woman went to recover her dog, Julie continued to discuss her surroundings.

Once she saw Tasha was struggling, she leapt into action, handing her phone over so she could jump in herself and help rescue the injured dog called Daisy.

It seems not all heroes wear capes.